Pear shaped figure.
How to draw a woman with a pear shape figure.

As well as using the nude examples on this page please also see Drawing the hourglass figure as the principles are the same, as all you are really doing is changing the shape of your subject's body.

For a quick tutorial on drawing legs in different positions see here. Warning this page contains artistic nude sketch's that some may find offensive.

The next thing to do is to go back and finish the arms. There are many ways you can position the arms and you can find a tutorial on arm proportions and positioning here. Warning this page contains artistic nude sketch's that some may find offensive.

On completion of the initial outline begin to add a little detail as can be seen in the example.

When I drew my Pear-shaped figure I chose to slightly alter the position of the arms bringing them in closer to the body. This was purely my preference, it is entirely up to you how you pose your subject.

The next thing to do was to draw the breasts. It is important that you position the breast correctly. SeeHow to draw the Female breasts.
Also remember to keep them narrower than the hips and thighs, as Women with a Pear shaped figure tend to have small to medium sized breasts so if you make them too large or too wide it will ruin the overall proportions of your figure. See, Breast size. The placement of the nipple is also very important as this can dramatically influence the appearance of the breast so be sure to take the time to position them correctly.

Below are some more examples of how the hourglass figure will look in various poses. 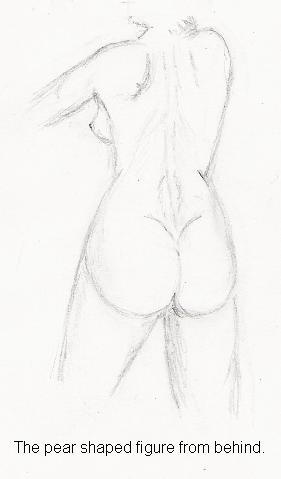 The Pear-shaped figure from behind.
When drawing the Pear-shaped figure from behind, it is important that you emphasise the roundness of the buttocks. Woman with a pear-shaped figure is recognised for having round buxom buttocks that truly emphasise their pear shape, as can be seen in the sketch above. It is also important to remember that the shoulders are narrower than the hips and should not be seen to be wider. Remember also that the breasts tend to be of a small to medium size so try not to overemphasise the breast or you may ruin the proportions of your sketch. Again the placement of the breast and nipple is important as this helps to show the position of the subject. 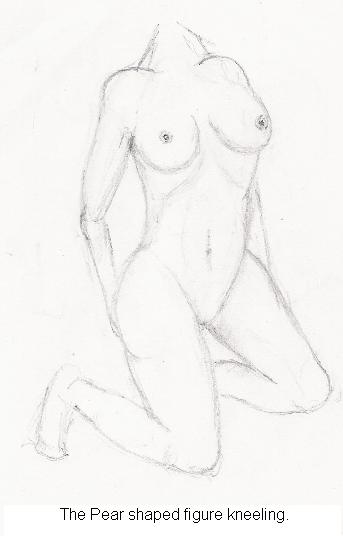 The Pear-shaped figure kneeling.
Notice how the hips are more rounded and emphasised on both sides and the thighs are heavier. This helps to emphasise and show the shape and roundness of the buttocks. Again I have pulled the shoulders back slightly to emphasise the breasts but this is optional. Note also how the stomach area appears flat and gently curves to the pubic area. 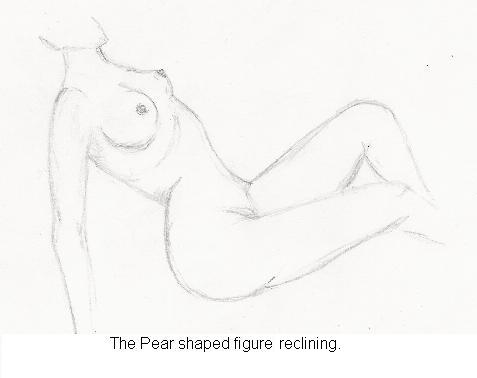 Notice again how the buttocks are more emphasised and the way they meet the waistline. Also, the thighs are larger which is characteristic of the Pear-shaped figure. It is important again to note the position of the breast and nipples in relation to the upper body.

How to draw the Banana figure
Drawing a pear shaped figure