All resources provided within this site are free.

There are four main body types. These are Hourglass, The Pear, The Apple; and the Banana. In this tutorial, I will be showing you a quick and easy way to sketch a basic banana shape figure using simple easy to follow instructions.

The Banana or rectangle body shape is always associated with a sporty or boyish/masculine appearance having almost no distinct proportions.
The shoulders, bust and hips all run in a straight line and have virtually the same measurements. There are no obvious or distinct curves to speak of that define a feminine shape and women with a banana-shaped figure also tend to have a broader back.

However Women with a banana-shaped figure do tend to have good shaped slim arms and great slender legs, they also nearly always have smaller breasts.
Woman with a Banana/rectangle shaped figure also has flatter, less defined buttocks unlike those associated with the more curvy Hourglass and Pear shaped figures.

Setting out the Pear shape silhouette.

To set out the proportions for my banana/rectangle shaped figure I used the same principles as set out in How to draw the female body for absolute beginners. I then added two vertical lines of equal distance from the centre line to set out the approximate hip waist and bust width as shown below.

Starting at the neck gently curve your line down and then out toward the shoulders continuing it on slightly to form the top of the arm as shown above.

The next thing to do is to draw the bottom of the arm into the armpit which is located just above the bust line. (shown below.) I prefer to add the arms in after I have sketched my basic body shape but you can add them now if you prefer. If you are unfamiliar with drawing arms you can find a basic arm tutorial containing different arm positions and their proportions in relation to the body here. 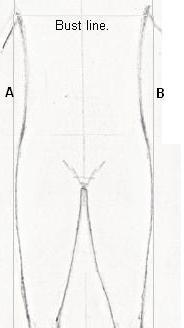 Once you have done this draw a gently curving line from the armpit into the waist and then continue it down and out to the outer reference lines A and B roughly inline with the groin to form the hips. It is important that you do not overemphasise the curves of this line as a woman with a banana/rectangle shaped figure is not usually very curvaceous.

Down to the legs.

From the hips continue on down the thighs, again making sure that the line is not too over exaggerated, but curves just enough to give the thighs a natural athletic look down to the knee.

From the knee continue on down the leg trying to maintain a slender athletic appearance.
This can be done by slightly exaggerating the calf muscle on the back of the leg as shown in the example above and below.

If you are unfamiliar with drawing legs you will find a basic tutorial with helpful advise on the positioning of legs and leg proportions here. How to draw legs.,

Once I had established my basic body shape I began to add some basic details.
Starting with the breasts, which I was careful not to over exaggerate by keeping them in proportion to the rest of the body, as a woman with a banana-shaped figure will tend to have smaller less prominent breasts. See breast size for a basic guide.

If you have never drawn breasts before, see our detailed guide on How to draw the Female breasts.

The placement of the nipple is also very important as his can dramatically influence the appearance of the breast so be sure to take the time to position them correctly. See Breast position Also a woman with a Banana shaped figure will not have a prominent rib cage as she tends to carry her body fat evenly so there will be less definition on the upper body. Her waist will also be less noticeable also.

Below are some more examples of how the banana figure will look in various poses. 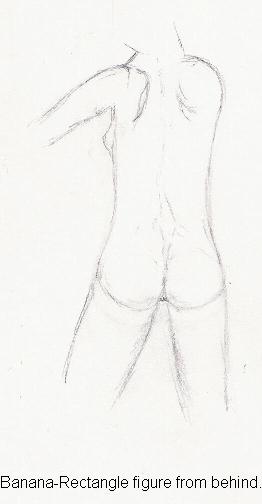 The Banana/rectangle shaped figure from behind.

When drawing The Banana shaped figure from behind, it is important to remember that there is only a little amount of definition in the waist shoulders and hips. Also as the subject is facing away her buttocks and breast will be visible so it is important that you do not overemphasise them. Although barely visible the placement of the breast and nipple is important as this helps to show the position of the subject. 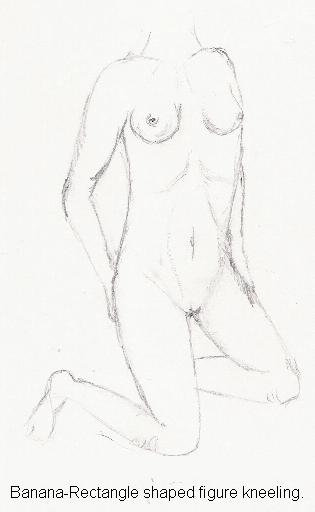 Notice how there is very little curve into the waist on both sides and that the overall shape of the body is straighter and less defined making it look more masculine and childlike. The buttocks are flatter and less visible and appear almost flat as they join the thigh. Note also how the stomach area is flatter and has little definition down to the pubic area. The pubic area is more visible as there is little fat on the thighs and the buttocks are less rounded. The breasts are small and sit slightly higher up the chest. Again it is important that the breasts are positioned correctly and that you do not overemphasise the rib cage See Breast position 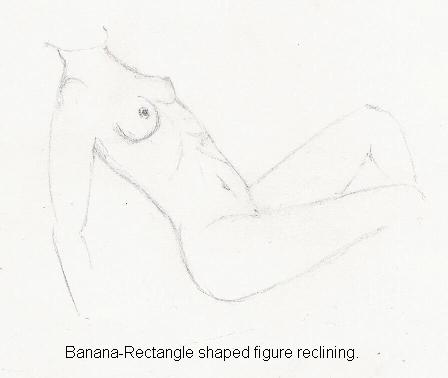 Notice how the rib cage is less visible above the waistline. There is very little tuck in the waist as the body shape is straighter and more masculine. The stomach appears flat and there is very little curve toward the pubic region and buttocks. It is important again to note the position of the breast and nipples in relation to the upper body. As the breasts are smaller they sit on the chest more easily and appear firmer and perter. 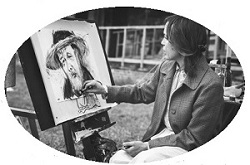