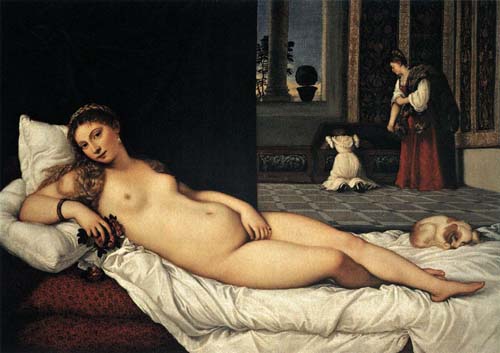 The painting in oils on canvas was commissioned by Guidobaldo II Della Rovere, the Duke of Urbino., a city in the Marche in Italy, south-west of Pesaro. It would originally have decorated a cassone, a rich and showy type of chest, which may be painted, carved and gilded and was traditionally given as a wedding present.

The pose is based on Giorgione's Sleeping Venus (c. 1510), however, Titian uses more sensuality in comparison to Giorgione's sublime remoteness.

It does, however, lack any classical or allegorical trappings ('Venus' displays none of the attributes of the goddess she is supposed to represent), the painting is unapologetically sexy.

The frankness of Venus' expression is often noted; she stares straight at the viewer, appearing comfortable with her nudity. In her right hand, she holding a posy of flowers whilst her left covers her pubic area, provocatively placed in the centre of the composition. In the near background, there is a dog, symbolising fidelity, who is asleep. The maids in the background are shown rummaging through a chest, apparently in search of Venus's clothes.