William Bouguereau.
Zenobia found by shepherds on the banks of the Araxes. (1850) 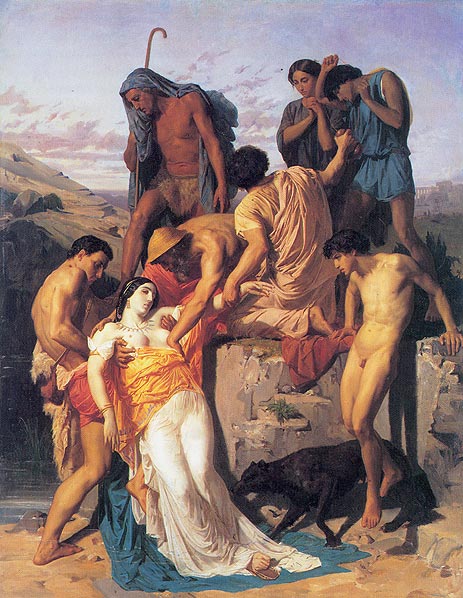 William Bouguereau. Zenobia found by shepherds on the banks of the Araxes. (1850)


Two years after producing his first major piece titled Equality before death Bouguereau won the coveted Prix de Rome in 1850, with his Zenobia Found by Shepherds on the Banks of the Araxes, which earned him a four-year stay at the Villa de Medici in Rome. The piece itself measures147 cm (57.8 in) x 113 c m (44.4 in) and depicts the discovery by shepherds of Zenobia the wife of Rhadamistus who was found lying near death after a failed attempt to kill her by her husband while on the run together from the Parthians. Unable to bear the long ride on horseback any longer Zenobia manages to convince her husband to kill her so that she would not fall into the hands of the Parthians. 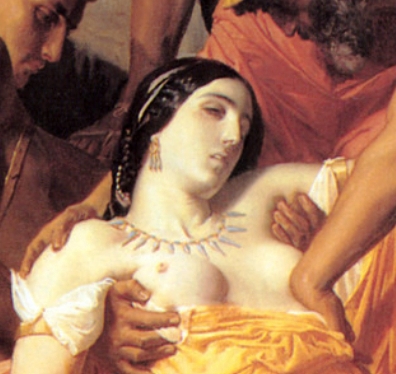 In the piece, Zenobia is depicted near death and in a weak, exhausted and dishevelled state at the banks of the Araxes river where after being given what her husband thought to be an honourable death by the sword she was dragged and laid to rest in the hope that the river would carry her body away. She is discovered by a group of shepherds who spotting by her dress and fine jewellery that she is not of common birth set about attending to her. Her robe is hanging loosely off her shoulders exposing her full breasts which appear to have grabbed the attention of the youthful-looking boy lowering himself to the ground to the front right of the picture. She is being lifted to her feet, if not to delicately, as the shepherd to the left clearly has his knee buried in the small of her back to provide purchase, while an older male above on the rocks who is wearing a hat appears to be steadying her with his right hand while shielding a wound to her side just below her left breast with the palm of his left hand. She is also being supported by another who is holding onto her left arm while reaching for a water skin in order to offer her a drink. 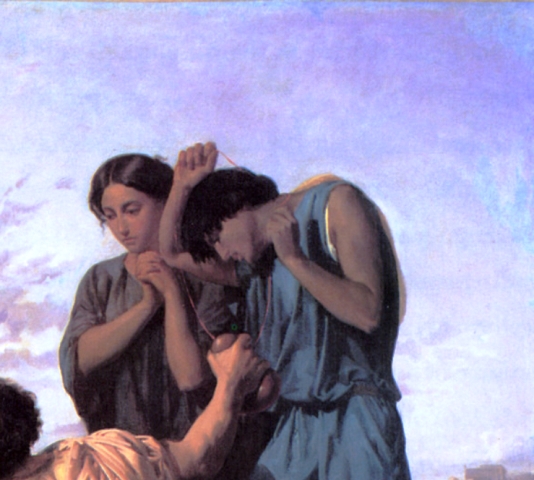 A woman to the rear of the piece, presumably the daughter or wife of one of the shepherds appears to be anxious and concerned by the discovery of Zenobia while the dog at the front of the piece who may have discovered her inquisitively sniffs at Zenobia's robe.

The above account is my interpretation of the work and should in no way be taken as fact.

The lead up to her discovery of Zenobia.

Rhadamistus, son of King Parsman I of Iberia (Pharasmanes), was known for his ambition, good looks, and valour. Parsman, fearing usurpation by his son, convinced Rhadamistus to make war upon his uncle, King Mithridates of Armenia, Parsmans brother, and father of Rhadamistus' wife, Zenobia. The Iberians invaded with a large army and forced Mithridates into the fortress of Gorneas (Garni), which was garrisoned by the Romans under the command of Caelius Pollio, a prefect, and Casperius, a centurion. Pollio, swayed by Rhamistus' bribery, induced the Roman soldiers to threaten capitulation of the garrison. Under this compulsion, Mithridates agreed to surrender to his nephew. Rhadamistus executed Mithridates and his sons despite a promise of non-violence and became King of Armenia.

Rome decided not to aid their Armenian allies, only nominally demanding that Pharasmanes withdraw from Armenia. The Roman governor of Cappadocia, Paelignus, invaded Armenia anyway, ravaging the country. Syrian governor Quadratus sent a force to restore order, but he was recalled so as not to provoke a war with Parthia, whose King Vologases took the opportunity to send his army into Armenia, driving out the Iberians. A winter epidemic forced the Parthians to withdraw from Armenia, allowing Rhadamistus to return. He punished as traitors those Armenian cities that had surrendered to the Parthians. They soon revolted and replaced him with the Parthian prince Tiridates. Rhadamistus had to escape along with his pregnant wife, Zenobia, of whom Tacitus relates a romantic story. Unable to bear a long ride on a horse, she convinced her husband to kill her so she would not fall into the hands of their pursuers. Though stabbed and left at the banks of the Araxes, Zenobia survived and was found by some shepherds. They carried Zenobia to the court of Tiridates, who received her kindly and treated her like royalty.

Rhadamistus himself returned to Iberia. However, he was soon put to death by his father for having plotted against the royal power.

The above information can be found at http://en.wikipedia.org/wiki/Rhadamistus