Material resources for this project. 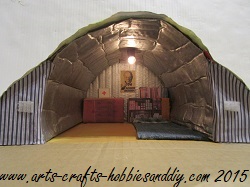 PT2 go to PT1 - PT3 - PT4 - PT5
In this 2nd part of the craft project on how to make a realistic miniature version of a WWII Anderson Shelter, you will add the front of the shelter.
In this project, I have made the front detachable so that you can see inside the shelter in order to get a really good Idea of what it must have been like. 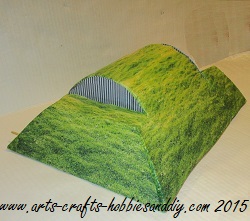 
Stage 6:
Forming the front of the shelter.

Now that you have both the sloping sides fixed to the air raid shelter you are now ready to build the detachable front. as shown in the pictures below.
Note: You may also have noticed that I have placed a thin layer of packing foam over the top of my shelter as I thought it would help smooth out the transition of the wire on top and where the sloping sides meet the shelter. 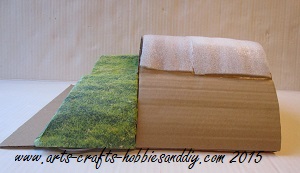 To begin you will first need to make a template of the front of the Anderson shelter. To do this you will need to place a piece of cardboard against the front of the shelter and then draw around it as shown below. 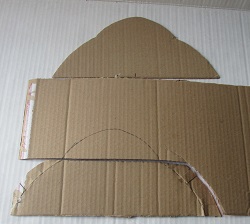 The front of the shelter is formed by the two main parts as shown below. You can see in the picture that I have one template made and have repeated the process to make another template that will form the front edge, shown above in the main picture with the sandbags on in the picture.
As with the side pieces that you made earlier you will need to allow for some tabs on the front piece as shown above. You will also notice that I have cut the top part of the template off in line with the top of the sloping sides as shown below.

You will also notice that I have bent the tabs to the shape of the curve using the same method described in Stage 3 of PT1.
With this done you will now need to mark out the entrance as shown below.

Again make sure that you allow for tabs before you cut the card as shown. 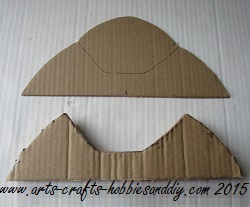 You should now have two separate pieces that look similar to those shown above. You will also notice that I have marked out the shape of my front piece on the back template.
To do this simply fold back all the tabs and place the front template on top of the back one making sure you line up the bottom edge and then draw around it.

With both the front and back piece made you now need to add the middle and the sides.
the first thing you will need to do is to add some tabs to your back piece as shown.

To make the tabs simply cut some rectangular pieces of card, fold them in half and stick one-half to you back template so that they just touch the lines that you made by drawing around the front piece as shown above.

The next thing to do is to link the front and back pieces together.
To do this cut a rectangular piece of card to fit the middle, making it as long as you want your entrance to be. See below. 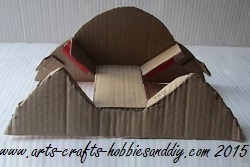 You can now see how it will work as your front piece is now starting to take shape. The next thing to do is to make your side pieces and fix them in place.

Gently slope the front piece forward and then carefully measure each piece accordingly. You should now have something that looks similar to the example below. Notice the sloping edges on the side pieces. This is because I want to create the effect of a grass bank that will slope away from the shelter.

Stick all your pieces in place and leave to dry.

Hint: It may help to use your pegs to hold the pieces in place while they dry.

Stage 7:
Adding some detail to the front of the shelter.

Once you have assembled the front of your bomb shelter you are now ready to add the finishing touches.
You can either paint it with the effect that you want or like me, you can source an image from the internet and apply it to your finished frame.

As you can see in the picture below I chose a grass effect. To do this find the image you require and copy it into MS Paint. You may need to scale it down to match the size of your model, as can be seen in my example. Once it is scaled down to the correct size go to page setup and set your page to A4, remove all borders, although the printer will add a minimum border, This is OK, check it first in print preview and if you are happy with the image, press print.

The model I made was quite large so I printed off 4 copies so that I could use them to cover my whole shelter once it was complete, as seen in the pictures at the top of this page.
With this done you can now use them to add some finishing touches to the front of your Anderson shelter.

You will also see that I have added a corrugated Iron effect to the shelter front. This can be done exactly the same as adding the grass effect and is discussed earlier. 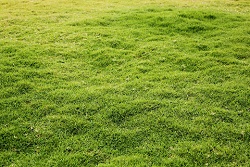 I chose this image as it will add a nice raised 3D effect to the sides of my air raid shelter. As shown in the example above, make sure you overlap the front edge. To enable you to stick the edge down carefully make several scissor snips along the overlapping edge and glue each piece to the front sloping face. The reason for this is so that when you add your sand-bag effect to the front the cut edges of the sandbags will have a grass effect behind them making them look more real as if they are slightly overgrown with grass.

The next thing to do is to create the sandbag effect for the front of the Shelter bank.

Optional.
The next thing to do is to stick a piece of paper with a corrugated Iron effect onto the back of the model front and then cut a small doorway as shown in the image below.

To do this take a plain piece of paper large enough to cover the front of the shelter and draw around the profile. Once you have done this you can draw your sandbag effect the piece of paper before you cut it out. 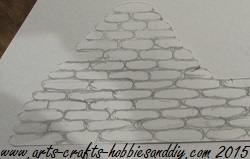 With this done you are now ready to carefully snip the shape of the sandbags on each side of your template. When you have finished cutting out the shapes you are ready to paint it and bring it to life. First ad a base coat of a light yellow/brown.
Do not apply it too thickly as you need to be able to see your drawn image below. Once you have done this you can start to draw on the shapes of the sandbags by drawing over your pencil lines with a brown coloured pencil or pen as shown.

When you have completed the whole template you can now add a stitch detail by applying a thin white line to each sandbag, using a sharp white coloured pencil as shown below 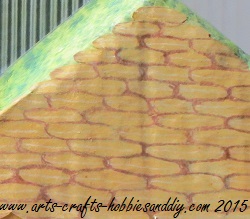 When you have finished making your model you will need to add some velcro tabs to your front piece to secure it to the rest of your model as shown in the main pics. This is what will allow it to become removable and enable you to see inside.

How to make a bomb shelter Pt 3
Make a model WWII Anderson Shelter.