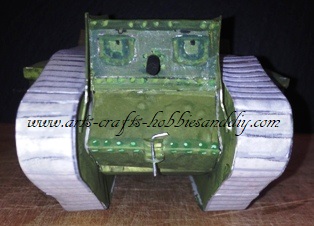 In this 5 part craft project on how to make a WW1 Landship, you will be making a semi-realistic miniature version of a WWI MKIV Landship. Landships were developed during the first world war as a response to the stalemate that happened on the western front. They were used as a terror weapon to instil fear into the enemy and as a means to cross the battlefield as they could easily traverse trenches and barbed wire and other obstacles that covered the battlefield. 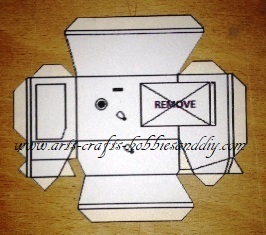 Firstly make the Sponsons which where used to house the main side guns. You will need to use Sheet 1.
Carefully cut around each template making sure that you do not remove the tabs as these are needed to put the gun Sponsen's together. Do not remove the rectangle marked (Remove) yet as this will weaken the template and make it harder to assemble the Sponson.

Make all folds on both the tabs and the sponson as shown to form its shape. It's best to use the edge of a ruler or set square for this as you can use its edge to line up your folds and then bend them over as shown.

With all folds made form the gun sponson by sticking all your tabs in place. 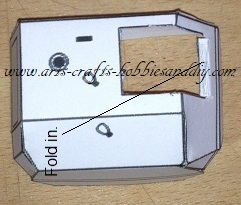 With the gun sponsons stuck together, it is now time to remove the rectangle marked (Remove) this will provide an opening into which we will add a Gun which we will be making in the next step of this tutorial. DO NOT remove the extra tab on the front edge as this will need to be folded in to provide a side on the opening as shown.