Buy materials for this project. 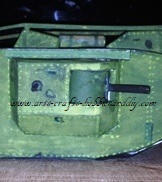 How to make a WWI MKIV Tank.

With the Sponsons made it is now time to make the gun mounts that will sit inside the sponsons and house a QF-6 pounder 6cwt Hotchkiss guns.

Use Sheet 1.
Carefully cut around each gun housing template ensuring that the tabs are not removed as these are needed to form the gun housing. Also using a compass, then sharp pencil, make a small hole approx 3mm at the point marked with the small cross. It is easier to make the holes at this stage.

Make all folds on both the tabs and the gun mount to form its shape as shown above. With all the folds made form the housing by carefully bending the back of the housing with the tabs on and sticking them in place as shown in the picture. Notice that there is a square tab left after sticking which will be used to fix the gun mount inside of the Sponson.

With the gun housing stuck together, it can now be reinforced by adding the spacers that are provided on the sheet. Firstly, using a compass or sharp pencil make 3mm holes at the point marked with a small cross the same as with the housing template. It is best to add 3 spacers depending of course on the thickness of card being used to the top of the housing for strength, (the side without the square tab), it also helps line the housing up with the aperture in the sponson, stick one or more to the bottom also as they are for reinforcing purposes to hold the 3mm dowel pin that will hold the gun in place. Hence there are extra spacers provided. 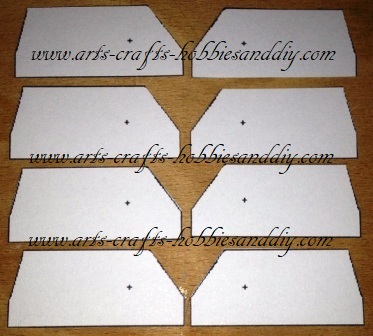 How to make a QF-6 pounder 6cwt Hotchkiss gun.

With the housing made it is now time to make the gun. Use a 20mm wine bottle cork, preferably the foam/synthetic type that has the rubbery coating as they are exactly the right size to fit in the housing of this model WWI tank. Mark off the cork at 15mm from the end. Do this with a ruler by keeping the end of the cork inline with the edge of the ruler and marking it at 15mm then carefully rotate the cork and make another mark.

Continue this all around the cork and then using a craft knife carefully cut the piece off. You will need to repeat this process as 2 cork pieces are needed.

If you do not have a suitable cork, roll up 15mm strips of card to a diameter of 20mm. Wrap the card around a 3mm dowel, matchstick or cotton bud and glue it as it is rolled. See PT5 Adding the exhaust system for reference.

With the pieces of cork cut, the next thing to do is to drill a 3mm hole through the middle of the cork as shown. Drill another 3mm hole in the side of the cork to take the Gun barrel which will be made from a 3mm piece of dowel cut at approximately 22mm in length, as shown and then glued into place leaving approx 18mm protruding from the cork. 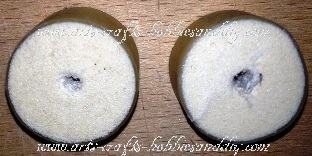 With the gun barrel fixed in place, take the gun housing and place the cork in the open end as shown. Line up the holes in the housing with the hole in the centre of the cork and insert either a 3mm dowel or a matchstick cut at approximately 22mm. Push the stick through the holes to fix the gun in place then put a spot of glue on the end of the dowel or matchstick to hold it there.

Now with both the Hotchkiss gun mounts and sponson made put them together. Take the Sponson and gun mount and place them as shown.

Apply glue to the gun mount where indicated then place the sponson over the gun mount ensuring the gun is lined up with the opening. Hold it firmly in place making sure that the mount is in contact with the Sponson. Pegs may be needed for this.

Paint them or place them to one side as it is now time to build the WWI Landship tank track assemblies.


Free craft projects to make and do.