The Tempest by Giorgione: 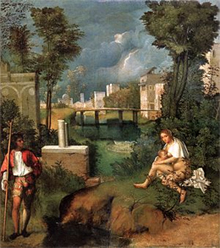 The Tempest sometimes referred to as the first landscape in the history of Western painting.

Nobody as yet has reached a full and decisive decision as to the true meaning behind the piece all though many have speculated as to its meaning. The Tempest portrays a soldier? and a woman who is thought to be a gipsy, and by others a prostitute. The woman is breastfeeding an infant in what is perhaps a slightly unconventional manner as the child is to the side of the woman and not being cradled in her lap as would be the norm. Her legs are positioned in such a way that the upper part of her pubic region is visible and she is staring out of the painting toward her viewer.

The soldier also thought to be a city dweller carrying a staff, a shepherd, and also a gipsy is standing on the other bank of a stream that is running between them. He neither seems particularly bothered nor interested in the woman but it has been suggested that the two subjects could be representative of Adam and Eve after being thrown out of paradise. Paradise being represented in the landscape behind them and Gods fury being depicted in the lightning bolt shown in the stormy sky. Another suggestion is that it is a portrayal of the flight into Egypt by Mary and Joseph when they learn from the three wise men of King Herod's intentions to kill all the infants of that area. It is also suggested that there is a crane sitting on the rooftop of the building to the right. The crane is one of the attributes of Demeter suggesting that perhaps the Tempest is a representation of the love affair between Demeter the Greek goddess of the harvest and Iasiôn a demigod. It is said that they met at the wedding of Kadmos and Harmonia and that they made love in a thrice-ploughed field resulting in the birth of Ploutos the Greek god of wealth. Zeus being so angered by their actions strikes Iasiôn down with a thunderbolt as is depicted by the damaged column in the picture supposedly meant to represent a life cut short.

Radiography of the Tempest has shown that in the pentimenti (underpainting) the male figure to the left was originally a seated female nude which suggests that whilst painting The Tempest Giorgione never really had a fixed idea of what he was trying to portray. Further examinations of the pentimenti have revealed that the lower portion of the cupola's base ( In architecture a Copula is a small dome-like structure on the top of a building ) and an adjacent tree were replaced by the hillock supporting the wooden bridge, suggesting even more that Giorgione was unsure of what he was trying to depict.