Tiziano Vecelli
the greatest Renaissance painter of all time 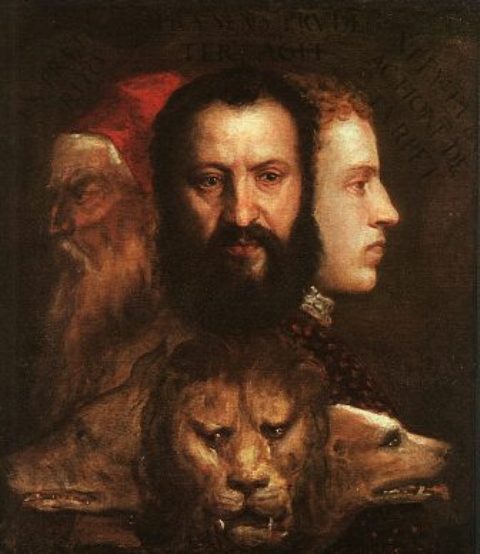 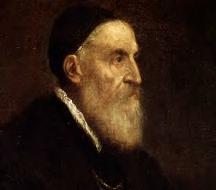 Titian: About the artist.

Titian was born to Lucia and Gregorio di Conte dei vecelliin a small village of Pieve di Cadore in the Dolomite range of the Alps. Although there are much speculation and contradiction to his exact date of birth it is thought to be around 1485. His father was superintendent of the castle of Pieve di Cadore and also managed local mines for their owners. He was also a distinguished councillor and soldier.

When he was ten years old he was taken to Venice with his brother Francesco to stay with their uncle and began to study under the celebrated artist and mosaicist, Sebastian Zuccato. After 4 to 5 years he then went to study under Gentile Bellini and then Giovanni Bellini an established and well-known artist of the time. While there he befriended several other young artists among whom were Giovanni Palma da Serinalta, Lorenzo Lotto, Sebastiano Luciani and Giorgio da Castelfranco, who would also become renowned in their own right.

In 1507 he joined the workshop of Giorgio Barbarelli da Castelfranco (Giorgione) as an assistant. Giorgione was commissioned by the state to execute frescoes on the re-erected Fondaco dei Tedeschi and it is believed that fragments of Titian's work still remain. It was while working alongside Giorgione that he would adopt the style that would stay with him in his work to the extent that some of his earlier works could be accredited to Giorgione. He stayed for only 3 years as Giorgione died at the very young age of 33 which left Titian to finish some of Giorgione's unfinished work. Giorgione's death along with the death of Bellini in 1516 would leave Titian in a league of his own within the Venetian school.

In 1510 Titian received his first important commission. It was to paint frescoes in the Scuola del Santo in Padua, representing three miracles of Saint Anthony. The Miracle of the Newborn Child, The Healing of the Wrathful Son and The Miracle of the Jealous Husband. Following this, he began to win more commissions and establish himself in his own right.

In 1512 he returned to Venice and a year later he sets up a workshop with students such as El Greco, Tintoretto, Paris Bordone, Parrasio Micheli, Damiano Mazza and Polidoro Lanzani, he obtains a broker's patent in the Fondaco dei Tedeschi, the outer facade was later to be painted by him. Termed La Santeria or Sensoria (a privilege much coveted by rising or risen artists), he became superintendent of the government works, being especially charged to complete the paintings left unfinished by Giovanni Bellini in the hall of the great council in the ducal palace. He set up an atelier on the Grand Canal at S. Samuele, the precise site being now unknown.

In 1516- 1518 he painted The Assumption of the Maddona, for the high altar of the church of the Frari, one of his most world-renowned masterpieces, It was seen as a marker in Titian's career establishing him as a more universal artist who drew his inspiration from outside the confines of Venice. (Now in the Venetian Academy). It excited a vast sensation, being indeed the most extraordinary piece of colourist execution on a great scale which Italy had yet seen. He continued to establish himself producing many similar works through the following years and continued to establish himself as a master of his art which made his work even more desirable.

In 1525 He marries Cecilia of whom little is known, which then makes their first child legitimate. More children were to follow. After the birth of Lavinia which led to the death of his wife during childbirth in 1530, he moved with his three children to the Bin Grande and left them and the household in the care of his sister Orsa. Around this time also he became very close to Pietro Aretino an Italian author, Poet, Play write and satirist who was influential on contemporary art and politics and invented modern literate pornography.

From 1530 onwards his reputation continued to grow throughout Europe, and Federico II Gonzaga a client of Titian's who he first met in 1523 introduced him to the Holy Roman Emperor Charles V, (in Bologna, where he was crowned that year). Titian also began to change his style and devotes himself more and more to the dramatic style. He starts using related rather than contrasting colour's in juxtaposition (The act or an instance of placing two or more things side by side) using yellows and pale shades instead of the strong blues and reds which he used in his previous work. He continued his series of small Madonnas which he treated amid beautiful landscapes in the manner of genre pictures or poetic pastorals, the Virgin with the Rabbit being the finished type of these pictures.

The Assumption of the Virgin. The miracle of the newborn child. The healing of the wrathful son. 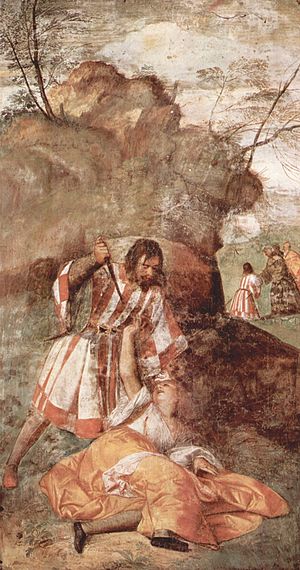 The miracle of the jealous husband.