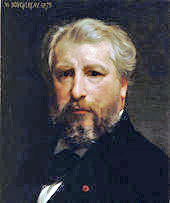 His parents Théodore Bouguereau and Marie Bonnin were merchants in the Wine and Olive oil business and wanted William to follow in their footsteps which, for a short period time he did. He also had three siblings, a brother Alfred and two sisters named Marie and Kitty. However, at the age of twelve he went to Mortagne to stay with his uncle, Eugene Dufaud. Eugene was a curate as he had recently been given the post at Saint-Étienne Church in the parish of Mortagne sur Gironde. Eugene taught the young William classical and biblical subjects and in 1839 arranged for him to attend school at Pons where he would learn about acncient history, mythology and the the writings of Virgil, Longus and Ovid 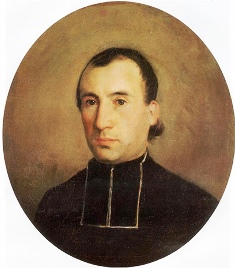 At the age of Seventeen he had to again join his family in Bordeux as his father wanted to train him so as to enable him to earn a sallaried wage and help toward the family. However, from an early age Bouguereau showed a natural talent and flair for art resulting in his father Theodore Bouguereau being convinced by family and friends to send him to École des Beaux-Arts in Bordeaux then headed by Jean-Paul Alaux, where he studied for two years. It was there that he would win first prize in figure painting for a depiction of Saint Roch. As a means to provide extra income Bouguereau also designed labels for jam and preserves.

Also to help him earn extra money Bouguereau was commissioned, through his uncle, to paint portraits of the local parishioners and when his Aunt equalled the sum he had earned, he was then able to afford to go to Paris and become a student at the École des Beaux-Arts. He also attended anatomical dissections and studied historical costumes and archaeology in order to add to his formal training in drawing.

The studio of François-Edouard Picot. 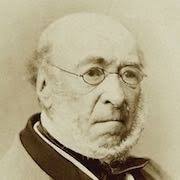 In 1846 at the age of Twenty one Bouguereau was admitted to the studio of François-Edouard Picot, a French historical painter. He studied painting in the academic style which meant that the highest status was placed on the portrayal of historical and mythological subjects. Something he had studied during his stay at Pons. After several previous attempts, Bouguereau finally won the coveted Prix de Rome in 1850, (a French scholarship for arts students) with Zenobia Found by Shepherds on the Banks of the Araxes, which earned him a four-year stay at the Villa Medici in Rome. This would enable him to study first-hand the Renaissance artists and their masterpieces. While in Italy Bouguereau travelled extensively in order to copy and master the masterpieces, visiting places such as Venice, Naples Verona, Milan, and Parma. During his stay in Italy he also visited the lakes and hill towns of Rome. An early reviewer of his work stated that "Bouguereau has a natural instinct and knowledge of contour. The eurythmy of the human body preoccupies him, and in recalling the happy results which, in this genre, the ancients and the artists of the sixteenth century arrived at, one can only congratulate Bouguereau in attempting to follow in their footsteps. Raphael was inspired by the ancients, and no one accused him of not being original." Being an admirer of Raphael William took this as a great compliment.

At the age of 23 after studying for two years at the Ecole des Beaux-Arts de Paris and much pressure from his family and a fervant desire to succeed he produced his first major piece which was titled Equality before death, L'égalité devant la mort. It was a 141cm x 269cm oil on canvas.

In 1854 Bouguereau returned to Paris where he frequently showed his work at the Salon and he received many awards and commissions for portraits and other pieces. 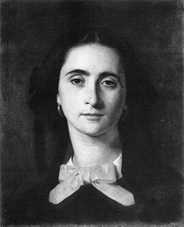 Two years later in 1856, he married Marie-Nelly Monchablon. Together they would have three sons and two daughters setting up home in Montparnasse, Paris. Sadly all three sons died. Georges died at the age of Sixteen. Adolphe-Paul was said to have died of Tuberculosis when only Thirty. His third son, William-Maurice, died in his infancy as did his other daughter, Jeanne-Léontine. 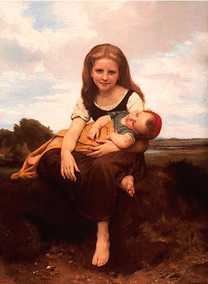 
In 1857, his first child Henriette was born. Bouguereau used his children in several of his works and Henriette can be seen holding her brother Paul in The Elder Sister, and is portraid by herself in The Crab. 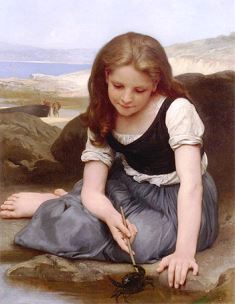 By the end of the 1950s, Bouguereau had become very well connected with art dealers, one in particular, being Paul Durand-Ruel a French art dealer who was associated with the Impressionists and who was one of the first modern art dealers to provide support to his painters with stipends and solo exhibitions.

He would help clients buy paintings from artists who exhibited at the Salons. With a draw of over 300,000 people they provided valuable exposure to exhibited artists and by 1860 Bouguereau's fame had spread to England. 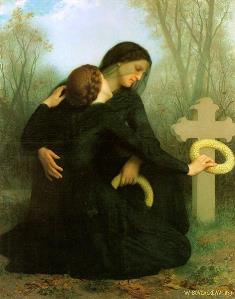 Bouguereau was now becoming more popular so in 1859 he was made a Chevalier ( meaning Horsemen. The English equivalent meaning knight) due to his increasing social status. It was during this year that he painted All souls day which was purchased by the city of Bordeaux. His son George was also born but as mentioned earlier would only live into his teens, eventually dying at just 16yrs old. 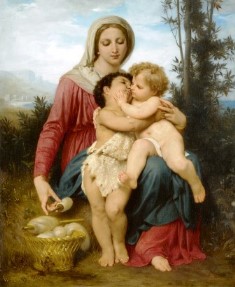 The following years after Jeannes birth were less productive with Bouguereau only producing twelve paintings, one of which titled Sainte Famille was purchased by Napoleon III as a present for his wife Eugénie de Montijo.

In 1865 he was awarded a commission for the decoration of the ceiling and the tympanums of the concert hall of the Grand Theatre of Bordeaux.

Around 1866, Adolphe Goupil a leading art dealer of the nineteenth century became the exclusive dealer for Bouguereau.

Bouguereau steadily gained the honours of the Academy, reaching Life Member in 1876, and Commander of the Legion of Honour and Grand Medal of Honour in 1885. It was around this time that he also began teaching at Académie Julian where he taught drawing.

1869 brings the birth of his son Adolphe Paul who can be seen portrayed in some of his paintings including The Elder Sister as shown previously. 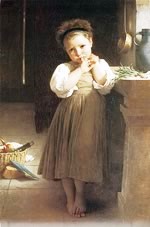 In 1872 tragedy strikes his family with the death of his youngest daughter Jeanne-Léontine who sadly dies from TB at the tender age of Eleven.

Death strikes again in 1875 with his son, Georges falling sick and dying at the age of just sixteen at the home of the Seignacs. He had been sent there to escape the suffocating heat of the Parisian summer. His death, yet another blow to an already grief-stricken man contributed to the creation of two of his most beautiful religious works; The Pietà and The Comforting Virgin. 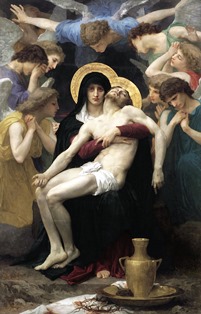 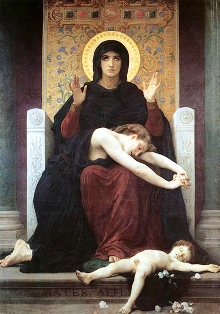 In 1876, Bouguereau was elected to the highest titular rank of , replacing Pils. It was in this year that his third son Maurice was born but he died that same year.

The following year in October 1877 after twenty-one years of marriage his wife Marie-Nelly Monchablon died from consumption. Despite his wife's death and the loss of his son Maurice at just two months old he managed to complete fifty-two pieces over the next three years.

In 1879 he secretly got engaged to Elizabeth Jane Gardener a woman twelve years his junior and a pupil whom he had known for ten years. Shortly after the death of his wife, he announced to his family that he was thinking of remarrying. This news was not received well by his daughter or his mother and so Bouguereau was sworn to secrecy and defied to marry her before the death of his mother, which he respecfully upheld.

During 1880 Bouguereau exhibits an original large version of Jeune Fille se Defendant Contre L'amour at the Paris Salon. At that time it was heralded to be one of his best mythological works. The large painting was one of three that Bouguereau produced along with smaller replicas that he was comissioned to paint for art collectors. Something that he did often to raise extra money.

In 1881 Bouguereau started work on what is now considered one of his most important paintings. A project titled Le Jeunesse de Bacchus. A project of such size and equisite detail it would take him three years to complete. Measuring a staggering 3.4mts x 6.1mts it featured a scene of song dance and merriment as an array of mythological beings celebrate the feast of Bacchus the Roman god of Wine and debauchery.

1884 saw the completion and unveiling of Le Jeunesse de Bacchus at the Paris Salon..

Then in 1885 he received the Legion of Honour and Grand Medal of Honour.

In 1899, his son Paul a well known and well-regarded lawyer contracted tuberculosis. On the advice of his doctor, he went to Menton in the south of France accompanied by his father and Elizabeth Gardener. They stayed with him until mid-May. Bouguereau made good use of his time in the South spending long hours painting. Paul later went to Pau to recover but following his return to Paris in 1900 he died at the age of Thirty. 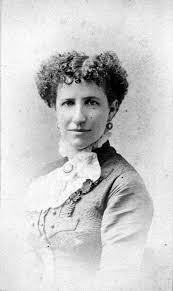 In 1896 following the death of his mother and after a long and not always approved courtship Bouguereau married American artist Elizabeth Jane Gardener. She was one of the first women artists who dared to invade the all-male establishment of the French art academies. Some of her best-known works were Cinderella, Corinne, Maud Muller, Fortune Teller, Cornelia and her jewels, Daphne and Chloe, Ruth and Naomi, The Farmer's Daughter, The Breton Wedding, and some portraits. During his career, William Bouguereau produced over seven hundred works, many of which were life size.

The death of William Adolphe Bouguereau.

In 1905 Bouguereau died at the age of eighty from heart failure. He was Buried at Montparnasse Cemetery, France. Through out his life as an artist he produced Eight Hundred and Twenty Two known works.

After outliving her husband William by eighteen years in 1922 Elizabeth Jane Gardener now aged Eighty Four dies and is buried also at the Cimetière de Montparnasse in Paris.

Henriette Amelie Vilhelminie Vincens, (born Bouguereau) William and Nelly's eldest daughter would outlive all her siblings and Marry Georges-Henri Vincens on the 27th May 1878 in Paris