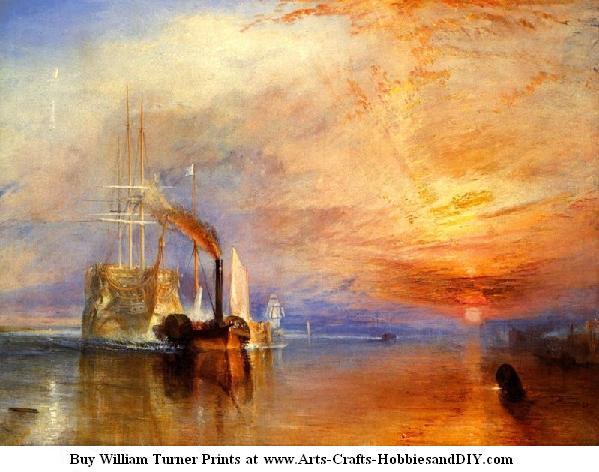 Joseph Mallard William Turner (JMW Turner) was born in Maiden Lane, Covent Garden London, England. Born to Gay Turner and Mary Marshall and Brother to Mary Ann Turner. His father was a barber and wigmaker. His mother became mentally ill, It is thought as a result of the death of his sister in 1786 who was five years old. Eighteen years later his mother died after spending five years in a mental asylum. At a young age, he received little schooling but was taught to read by his father.

In 1758 a young Turner was sent to stay with his uncle in Brentford. It was there that he first showed an interest in painting. Later his uncle moved to Margate where a young Turner went to school. He had already created many drawings of local settings and houses which his father placed on display in his shop window, selling them at every opportunity.

In 1789 at the age of fourteen Turner attended the Royal Academy of Art. It was there that he studied under Thomas Malton and a year later in 1790 he was accepted. Sir Joshua Reynolds, President of the Royal Academy at the time chaired the panel that admitted him, At first, he started to show an interest in architecture but was advised by Thomas Hardwick to keep Painting. 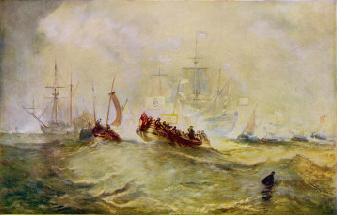 In 1793 he was awarded the Great Silver Palette for landscape drawing by the Society of Arts. In 1794 Turner began working at an engraver, his job was to supply designs for the Copper Plate magazine and the Pocket Magazine. Part of his job was to also make copies or elaborations of unfinished drawings by the recently deceased landscape artist John Robert Cozens. Influences from Cozens work and the Welsh painter Richard Wilson contributed to broadening his outlook and revealed to him a more poetic and imaginative approach to landscapes, which he would pursue throughout his career with an ever-increasing brilliance.

In 1795 Turner toured Southern England and Wales as a topographical draughtsman, this type of style of painting can be seen in many of his works. He became inspired by the 17th-century Dutch artists and Italianate landscapes. He also toured the West Country around this period.

JMW exhibits the first of many oil paintings. 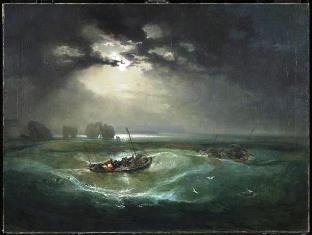 The Fishermen at sea.

In 1796 he exhibited the first of many oil paintings (Fishermen at Sea) along with ten drawings. It was a moonlight scene in the traditional style of Horace Vernet, Philip James de Loutherbourg and Joseph Wright.

In 1798 Turner moved to Harley street where he began an affair with a much older woman Sarah Danby, thought to be at least nine years his senior, recently widowed and a mother of three. This lasted for about ten years. They never lived together and kept their affair hidden and as secret as possible.

In 1799 at the youngest Permitted age of twenty-four Turner was elected an associate of the Royal Academy. He studies the work of Claude Lorraine which has an influence on his early style. At the same time, his mother became increasingly ill and is diagnosed with schizophrenia and becomes institutionalized for the rest of her life.

In 1801 he tours Scotland and becomes a father after the birth of the first of two Daughters, Eveline which he fathers with Sarah Danby.

In 1802 he becomes a full art academician, which in many countries is considered to be a great honorary title. He travels extensively visiting places such as France, Switzerland and the Vol d'Aosta on the border of Italy. On his return, he visits the Louvre in Paris where he studies the work of Titian and other artists.

In 1804 at the age of twenty-nine Turner had earned enough money to be financially independent, this allowed him to experiment and become more innovative in his work. He uses some of his money to set up a gallery at his Harley Street home. He begins to adapt his style and starts to use a chromatic palette and broadly applies atmospheric washes of paint to his work. Sadly his mother also dies in Bethlehem Hospital where she spent the remaining years of her life.

In 1805 Turner stages his own exhibition in his gallery at his home in Harley Street.

In 1807 he becomes a professor of perspective at the Royal Academy and in 1845 becomes appointed as deputy professor.

In 1808 Turner stays for the first time at Farnley Hall, the home of one of his patrons and soon to become dear friend Walter Fawkes.

By 1810 Turner has approximately £12,000 to his name, which by today's standards would be the equivalent of about £750,000. Despite this, he never had a bank account but instead invested his money in property and shares. He also moves to 47 Queens Street West. 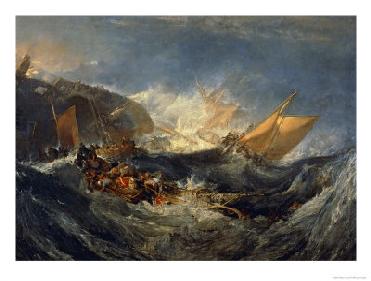 In 1811 his partner Sarah Danby gives birth to their second child, Georgina. He holds his first lecture of six as Professor of the academy.

In 1814 he becomes a founder member of Artist General Benevolent Institution which he continues to support for a long time.

In 1815 following the end of the war, Turner travels again to Europe. He also exhibits Dido Building Carthage at the National Gallery.

In 1817 he begins a Summer tour of Netherlands and the Rhine, and on his return, he stays at Rady Castle, then at his friends Walter Fawkes who not known to be wealthy at the time supported Turner. He stayed at Farnley Hall near Leeds in Yorkshire.

In 1819 he went to Italy where he mainly visited Venice, Rome and Naples. This was to have a great influence on his paintings and it is said that some of his greatest works were inspired by the visit

In 1820 he moves to his new gallery in Queen Anne Street West.

In 1822 Turner opens his new gallery in Queens Street West and is also commissioned by George IV to paint a large picture of the Battle of Trafalgar.

In 1824 the National Gallery is established and Turner is appointed on the committee to decide where best to locate it.

In 1825 he tours Holland, Germany and Belgium. It is in this year that he also loses his dear friend and patron Walter Fawkes

In 1828 Turner gives the last of his six perspective lectures and begins a commission for the carved room at Petworth House, the home of the third Earl of Egremont.

From 1828 to 1837, Turner was a frequent guest of George O'Brien Wyndham, the third Earl of Egremont and for some time he lived at his residence, Petworth House in Sussex. He was a keen fisherman and would fish in the lake in front of the main house. He along with several other artists received commissions from the Earl who liked to fill his house with valuable works of art. He also again visited Rome resulting in him producing bolder compositions in pure colour.

In 1829 his father dies at the age of 84. This affects him greatly, causing him to suffer from depression. He also exhibits his England and Wales collection, (a series of watercolours) in London and travels to France.

As time went by Turner began to exhibit eccentric behaviour, he had little, if any close friends except of course for his father who live with him for about 30 years and who worked for him as his studio assistant.

In 1831 he tours Scotland and it is around this time that due to poor health he revises his will.

In 1832 he visits Paris and meets the artist Eugène Delacroix.

In 1834 he tours Meuse, Moselle and the Rhine. He meets and spends some time with a woman who was over twenty years younger than him. She was also a widow. Her name was Sophia Caroline Booth whom he has a long-term relationship with. Again he chooses to keep it a secret. He also paints the burning of the houses of parliament.

In 1836 he again tours France Switzerland and Val d'Aosta.

Turner resigns his position at the Royal Academy

In 1837 he resigns his position as professor of perspective at the Royal Academy. He also loses another dear friend and patron Lord Egremont who dies. 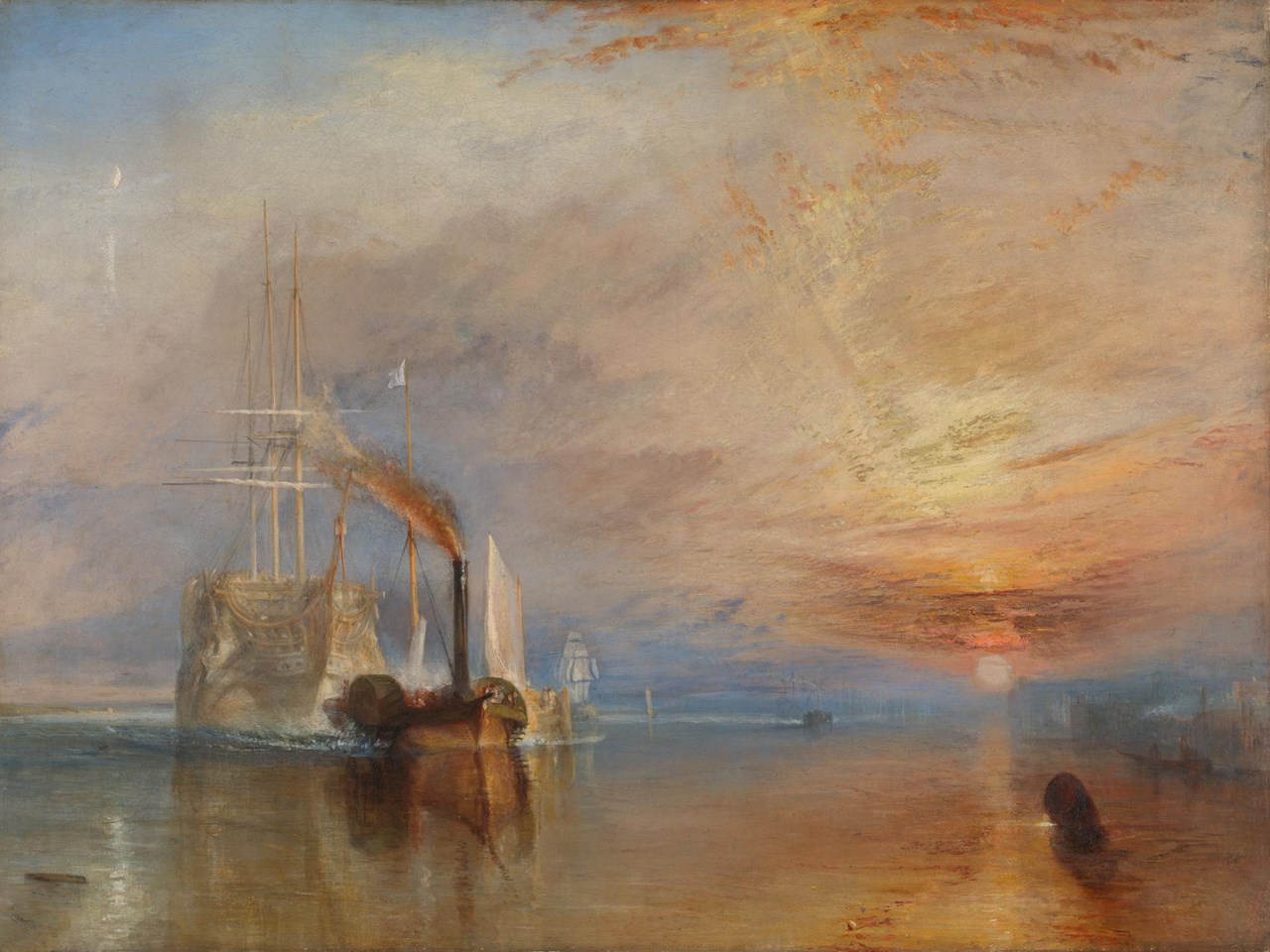 In 1839 at the age of 64, he exhibits The Fighting 'Temeraire' tugged to her last berth to be broken up. (see the top of the page)

In 1840 Turner meets the critic John Ruskin, who was one of the greatest figures of the Victorian age, being a poet, artist, critic, social revolutionary and conservationist. He became the great champion of his work. Turner showed an interest in contemporary technology which showed in works such as The Fighting 'Temeraire' tugged to her last berth to be broken up and Rain, Steam and Speed. Often people were critical of the subject matter in his work and only now is it really appreciated.

In 1841 he again visits Switzerland, this being the first of three consecutive visits over the next three years.

In 1844 Turner exhibits Rain Steam and Speed - The Great Western Railway. He was also known to be an admirer and supporter of I K Brunel. In this year he also met with Charles Dickens and again visits Switzerland including Heidelberg and the Rhine.

William Turner is appointed president of the Royal Academy

In 1845 Turner is appointed the acting president of the Royal Academy owing to the illness of its president Sir Martin Archer Shee. This year he Visits France.

In 1846 he moves to Chelsea where he rents a property on Cheyne Walk. He lives with Sophia Booth under the assumed name of Admiral Booth.

In 1848 due to the increasing decline in his health, he again revises his will. It is believed that in his original will he asks to be wrapped in his painting Dido Building Carthage but in his revised will he leaves it to the state.

In 1850 Turner exhibits for the last time at the Royal Academy.

One day Turner disappeared from his home. It was his housekeeper who found him after searching for days hiding in a house in Chelsea. He had been ill for a long time.

The death of Englands greatest artist.

In 1851 William Mallard John Turner died on the 19th of December at the home of his mistress and partner for 18 years Mrs Sophia Caroline Booth, after being found the previous day. He was buried in the crypt at St Paul's Cathedral where he lies at the side of Sir Joshua Reynolds an important and influential painter of his time. This was requested by Turner himself.

On his death, turner left a large fortune that he requested be used to support what he called Decaying Artists. He also bequeathed over 300 Paintings 19,000 drawings and had an estate valued at the time at £140,000. In modern terms, it would be in the region of £1`400,000.

The Fishermen at sea.

The wreck of a transport ship.