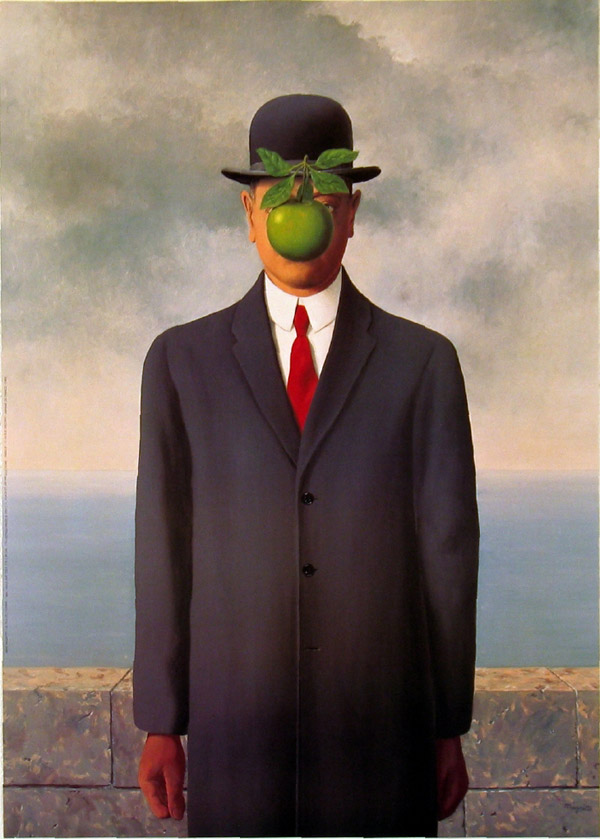 was Régine Bertinchamp. His fathers worked as a tailor and his mother was a milliner. He gained an interest in art which was encouraged by his father and began drawing lessons in Chatelet in 1910 where his family had moved to as his father was also a trader which meant they had to move around quite a bit.

In 1912 his mother who suffered from depression committed suicide by drowning herself in the river Sambre. When her body was recovered from the river 2 days later, Rene aged 14yrs was present, and the image of his mother floating, with her dress covering her face, was to become a prominent influence on some of his work.

He studied at the in Brussels after quitting high school in 1916. From then until 1918 he attended classes in Drawing, Decorative Painting, and ornamental composition. Some of his first works were landscapes showing the Sambre river where his mother had committed suicide.

He again meets Georgette Berger a wallpaper artist, who he had first met when he was sixteen in Charleroi in 1913 but had to leave a year later to go to Brussels. She also modelled for him in 1920 and they get married in the fall of 1923. Magritte supported himself and his wife by working in a wallpaper factory and was a poster and advertisement designer until 1926. He gained the support of Galérie Le Centaure in Brussels which made it possible for him to paint full-time.

In 1925 he decides that he will only paint objects with all their visible detail by placing them in situations which are unfamiliar to the spectator and abandons the qualities of pictorial art in favour of a colder style that portrays images from which all aestheticism had to be removed, he also begins to combine words and images in his works.

He then moves to Perreux-Sur-Marne near Paris to work alongside other surrealist artist and begins to produce many works containing macabre scenes such as L'Assassin Menacé and while in Paris he befriends and joins André Breton, a French writer, poet and surrealist theorist, Paul Eluard a French poet, Salvador Dali, a well known surrealist artist and other artists and writers who were part of the surrealist movement in Paris.

In 1929 he travels to Cadaquès, Spain, to stay with Salvador Dali, Joan Miro, a Catalan painter, Sculptor and ceramist, and poet Paul Eluard and Gala his wife, born Elena Ivanovna Diakonova, where he completes his painting The Treachery of Images and contributes to the final issue of the Révolution Surréaliste

Magritte moves Back to Brussels.

In 1930 although having managed to sell several of his works he is forced to move back to Brussels due to the closure of Galérie Le Centaure and the income from his contract ending. He works in advertising and then forms an agency with his brother that provides him and his wife with a minimal income to live on.

For the next 10 years, he is supported by friends and sponsors. This allows him to exhibit at the Palais Des Beaux Arts and although times are hard he manages to exhibit in several one man and group shows in London, Paris and New York along with other surrealist artists. While this is taking place his reputation abroad and interest in his work continues to grow.

In 1940 during the German occupation of Belgium he breaks with Breton, he then changes his style and begins experimenting with impressionist techniques, painting several nudes which he premieres at Galerie du Faubourg, in Paris and several exhibitions. However, these were not well received by his followers resulting in him changing back to his original style. He and his wife also moved to the south of France.

From 1943 onwards Magritte continues to experiment with different styles and techniques including those of Renoir and with the help of Alexander Lolas he successfully exhibits in New York. Lolas encourages him to focus more on painting images which would be better received by the public. Faced with this uncomfortable decision Magritte decides to create new combinations of his earlier works. 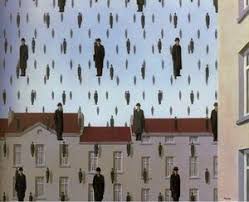 From 1950 onwards he is commissioned to produce some large canvasses for Edward James, a patron of surrealism in London and was also hired to create some murals for the Casino at Knokke-Le-Zoute. He also becomes the director of a new publication called La carte d'après nature. Among the paintings of this period one that gained a lot of interest was Golconda, which featured bowler-hatted men in raincoats floating weightlessly in a blue sky in front of houses. The bowler-hatted men although being seen before became his trademark emblem and are present in many of his future works. These type of images remain throughout the rest of his career.

From 1960 onwards Magritte visits Andre Breton in Paris and continues to exhibit in galleries, a large retrospective of his work is held at the museum of modern art in New York, thus proving his ever-growing popularity among his followers.

On the 15th of August 1967 at the age of 69 having painted over 1000 paintings, written numerous essays, created many sculptures and taken many photographs he sadly dies from pancreatic cancer in Brussels. His body was interred at Schaerbeek Cemetery.