The complete works of Vermeer.

Girl with a Pearl Earring: Johannes Vermeer, circa 1665-1675.
( The girl in this tronie is believed to be the artist's daughter Maria). 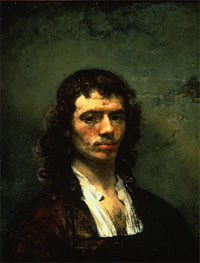 Johannes Vermeer was thought to have been born in 1632 in Delft in the Netherlands. It is Known that he was baptised on October 31st, 1632. His father was Reynier Janszoon Vos, but he later used the name, Van der Meer. He was a silk weaver and art dealer. His mother was Digna Baltens who came from Antwerp.

He was their second born and only son and it is thought that it was his father who may have had contact with other artists such as Balthasar van der Ast, Pieter Steenwyck, and Pieter Anthonisz. van Groenewegen who first introduced him to art. The family owned a large inn called the Mechelen which was named after the Belgium town.

Little is known about his painting background but it is believed that in 1632 he served a 6-year apprenticeship, part of it probably under the Dutch painters Carel Fabritiusor Leonaert Bramer.

In 1652 his father died and he inherited the inn where he and his family lived for some time. He also inherited his father's art dealing business.

In 1653 he enrolled as a master painter at the guild of Saint Luke of Delft where his father had also been a member, and around the same time married Catherina Bolnes, from Gouda, who came from a wealthier background than him. The marriage took place in Schipluiden and Leonaert Bramer was a witness at the wedding. Catherina was a Catholic, which resulted in Vermeer changing his religion to Catholicism shortly before their marriage and giving all his 15 children Catholic names. Four of them died at a very young age, and none of them was named after either of his parents.

Christ in the House of Mary and Martha. 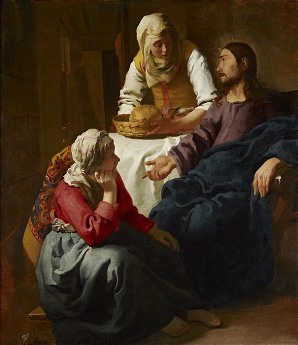 Vermeers brilliant use of light.

He paid particular attention to the way the light would hit objects and illuminate them and was a master at doing so. 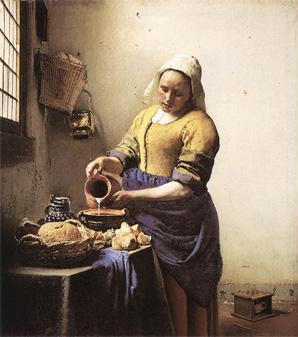 A brilliant example of this is Girl With a Pearl Earring (c.1665). The light catches her lips and earring immediately drawing your attention to them. Although some of his earlier work contained biblical or mythological scenes he usually painted scenes containing woman going about their everyday business or scenes containing women in love, women writing letters or playing musical instruments. He preferred to work using a cooler palette containing mainly Blues, Yellows and greys and in most of his surviving works of which there is about 35 his later works suggest this. It is to this period that his Townscapes belong.

In 1655 Vermeer appears to be gaining an elevated social status as both he and his wife have to sign a document before notary rota to guarantee a debt of 250 guilders that his father had contracted. The appearance of Sr. on the document seems to support this theory.

In 1656 he finally pays the remaining 1.5 guilders master fee to St Luke's Guild as he was unable to pay the full 6 guilders that were required when he became a member back in 1653. As his father was already a member it was only required that he would have had to pay 3 guilders but it is thought that he served his apprenticeship outside of Delft and so was required to pay the full 6 guilders. He also signs his painting The Procuress. He is 24yrs old. 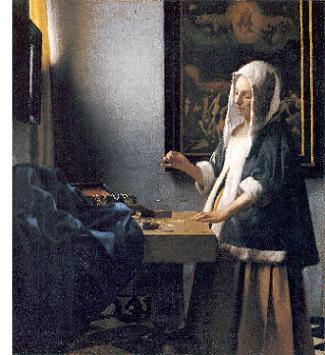 Sometime after his marriage to Catherina the family left the Mechelen and moved in with Catherina's mother, Maria Thins in Oude Langendijk, she was considered to be a wealthy divorcee. It is thought that throughout Vermeer's career it was her who helped finance his work and support the family as evidence was found in the records of the guild of master painters that Vermeer was experiencing financial difficulties. They named one of their children, their first daughter after her and her religious beliefs, which were Jesuit seemed to have an influence on their lives and the naming of their other children, one of which was named Ignatius after the founding saint of the Jesuit Order.

Pieter van Ruijven a wealthy member of the community whom it has been suggested may have had an influence on Vermeer's art, became his patron and purchased at least twenty-one of his work, although Vermeer relied largely on his business as an art dealer for his income.

The Guild of Master Craftsmen.

In 1672 following the French invasion of the Netherlands the demand for Art fell into decline resulting in Financial difficulties for him as he could no longer sustain an income from his work or business and started to borrow money in order to support his large family.

In 1675 aged 43 Jan Vermeer died. It was said that his wife had described it as a result and owing to the great burden of his children, having no means of his own, he had lapsed into such decay and decadence, which he had so taken to heart that, as if he had fallen into a frenzy, in a day or day and a half had gone from being healthy to being dead.

THE GIRL WITH THE PEARL EARRING.

CHRIST IN THE HOUSE OF MARY AND MARTHA.