In 1911 Picasso was accused of being involved in the theft of the Mona Lisa after his friend Guillaume Apollinaire was arrested on suspicion of stealing it and pointed the finger at Picasso who himself was brought in for questioning. Both Picasso and Guillaume were later declared innocent. It is in this year that travels to Cèret and meets Marcelle Humbert, (Eva Gouel). He also holds the first exhibition of his work in the US.

In 1912 Fernande Oliver leaves Picasso following his new found interest in Eva Goeul and Picasso produces his first collage work which he exhibits at the Dalmau galleries in Barcelona and for the first time in England.

In 1913 his father dies and he briefly visits Barcelona to attend the funeral. This year also marks the beginning of his synthetic cubist stageIn

1914 with the outbreak of WWI Picasso's outlook on life begins to change. This has an effect on his art and he begins to depict things in a more sombre realistic manner. His friend Braque and fellow artist André Derain were called up and gallery owner Kahnweiler being of German descent had his gallery taken away from him and was forced to leave France and live in exile in Switzerland.

In 1915 Picasso is devastated when after only a short relationship with Eva she dies prematurely at only thirty. Picasso expressed his love for her by painting I Love Eva in many of his Cubist works. During her illness, Picasso was also seeing Gaby Lespinasse a twenty-seven-year-old woman from Paris.

In 1917 Picasso travels to Italy and meets Olga Khokhlova the daughter of a General to Tsar Nicholas II and from Russian nobility. She is a classical ballerina from the Ballet Russe troupe formed in 1905 by Sergei Diaghilev’s, he was there designing the set and costumes for the ballet " Parade " in Rome which was being performed by the Ballet Russe. She was the first of only two wives. She left the troupe to stay with Picasso in Barcelona only found his bohemian way of life different to hers which led to a stormy relationship. Picasso's mother was unhappy that her son was in a relationship with a foreigner so he presented her with a portrait portraying Olga as a Spanish girl: Olga Khokhlova in Mantilla. On their return to Paris, he painted Olga in an armchair.

The begining of Pablo's Classicism and Surrealism stage

1918 This year marks the beginning of Picasso's Classicism and Surrealism stage. Picasso and Olga get married in the Russian Orthodox church in Rue Daru Paris with his friends Jean Cocteau and Max Jacob as witnesses. They then honeymoon in the villa of Eugenia Errázuriz who was a glamorous Chilean modernist art patron who paved the way for the modernist minimalist aesthetic that would be taken up in fashion by Coco Chanel. Picasso's friend Guillaume Apollinaire dies from Spanish flu after being worn down by his involvement in the war and the shrapnel wound that he had suffered to his head. He is buried at the Le Père Lachaise Cemetery, Paris.

In 1919 on the request of Sergei Diaghilev Picasso and Olga travel to London where Picasso is involved with the set and costume design for Le Tricorne. During this time Picasso also collaborates with the composer Igor Stravinsky on the ballet Pulcinella which was based on a character from the eighteenth-century play Commedia dell'Arte.

In 1920. Whilst in the company of Stravinsky he also makes several sketches of the composer. Picasso is visited by Joan Miró a Spanish painter, ceramicist and sculptor who has very strong views about art and the cubist style being quoted as saying of Picasso's work "I will break the guitar" intending to attack the popularity and appropriation of Picasso's art by politics. 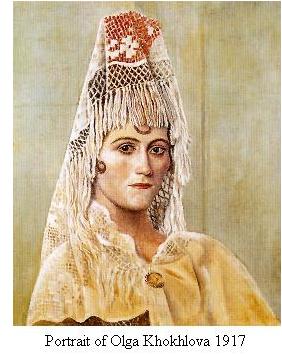 On the 4th February 1921, Picasso's first son is born. They name him Paulo. After his birth, their relationship begins to fall apart as a result of growing social conflicts between the couple. Throughout his childhood, Paulo is the subject of many of his father's paintings and when grown up he becomes his father's chauffeur. Picasso begins to work in many styles creating collages using mediums such as old paper and material. He also paints the masterpiece Three musicians which represent a classical expression of cubism. A piece he also creates in collage. In each piece there is featured a Harlequin who is believed to represent Picasso, a Pierrot believed to be his friend Guillaume Apollinaire and a Monk believed to represent Max Jacobs.

In 1923 Picasso meets with Andrè Brèton and spends the summer at Cap d'Antibes, in southeastern France, on the Mediterranean Sea in the Côte d'Azur. He also paints The pipes of pan which are regarded as the most important work of his “classicist period”

In 1924 Picasso again becomes involved with the ballet and in collaboration with the French composer Erik Satie and Russian dancer Léonide Massine he provides text and designs the set and costumes for the Ballet Mercure which was performed at the Theatre de la Cigale in Paris.

In 1925 through his friendship with writers and although not actively involved he attends the meetings of surrealist groups. It is around this time also that Picasso sets up a sculpture studio in Paris and begins to experiment working with different mediums as he is finding it hard to deal with the attention that follows his fame. It seems that no matter what work he produces he is praised regardless of its standard or quality.

In 1927 Picasso meets 17-year-old Marie-Thérèse Walter who he subsequently hires as Paulos nurse and begins an affair with her that he keeps secret from his wife.

In 1928 he begins his first metal sculpture in collaboration with Julio González. a Spanish abstract cubist painter and sculptor who Picasso first met in 1890 at the cafe Els Quatre Gats in Barcelona. Picasso meets Salvador Dali who is on his first trip to Paris and who holds Picasso in high regard. Picasso continues with his sculptures for several years.

In 1931 Picasso moves to Normandy to live at Boisgeloup Castle where he sets up his sculpture studio and begins sculpting large sculptures of the head of Marie-Thérèse. He then travels to Juan le pins where he produces a series of still life's which include works such as nude and still life. He also moves Marie to an apartment only minutes from where he and Olga live.

In 1932 he holds a retrospective exhibition at the Galerie George Petit in Paris exhibiting 236 works dating right back to 1901. It is in this year also that Marie appears in his work for the first time. He paints Woman with a flower, a disfigured portrait of Marie-Thérèse. A depiction bearing a greater resemblance to a surrealist work, using a style which Picasso was seemingly becoming more influenced by owing to the growing strength and popularity of the surrealist movement around this time. During the summer he spends some time at Boisgeloup Castle continuing with his sculptures of Marie-Thérèse. It is also in this year that the first catalogue of Picasso's work is published by Christian Zervos containing thirty-two volumes. Twenty-two works of Picasso's are purchased by the Barcelona museum of art from the Lluis Plandiura collection.

1934 is believed to be one of the worst years in Picasso's life. He is still married to Olga Khokhlova and Marie Thérèse is believed to have had an abortion. Olga apparently discovers his affair and begins to file for divorce which causes Picasso much torment and threatens his home and family life. He produces a series of pictures depicting his wife, who may have known about the pregnancy and subsequent abortion. One picture shows his wife as a raging monster wielding a carving knife in a murderous attack on Marie-Thérèse and certain aspects of other works depict a knife in various guises. His obvious torment is shown in his work and he produces numerous horrific bullfight scenes, portraying anger and violence. Picasso spends his summer in Spain, San Sebastian, Madrid, Toledo and Barcelona.

In 1935 After ten years of marriage, Picasso separates from Olga Khokhlova. For financial reasons, they are unable to divorce as French law stated that their wealth would have had to be divided equally. This meant that they would have to stay separated until her death in 1955. His new partner Marie-Thérèse Walter gives birth to his second child, a daughter they name Maria de la Concepcion Picasso (Maya). It is in this year also that his friend Jaime Sabartés whom he first met in 1899 becomes his private secretary. He also meets and becomes friends with Eugène Émile Paul Grindel (Paul Eluard) a poet and one of the founders of the surrealist movement. Picasso was already a friend of Eluards wife Nusch who was the subject of several cubist portraits and sketches by Picasso in the late 1930s, and it was also rumoured that she and Picasso had been lovers.