How to draw Science fiction characters.

A step by step guide to drawing a Na'Vi female face from the film Avatar.

Adding the details to your Na'vi female face.

Once you have your initial sketch you then need to start bringing your Na'Vi female to life.

The first thing to do is to work on the eyes. Starting with my sketched out line I will now begin to add some more detail to the eyes by lightly shading the corners to emphasize their cat like shape. Remember that the eyes are larger than a humans. See Na'Vi Eyes 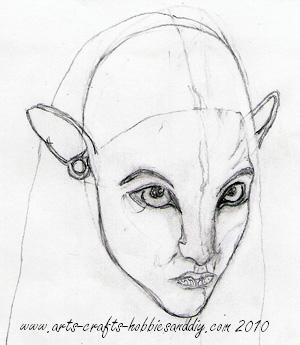 I will also darken the lines above the eyes and around the edge of the Iris so as to define the eyes and start to bring them to life. Once I have done this I will darken the pupil. By darkening the pupil the eye instantly appears to be staring out at you. It is very important that you do not darken the whole of the pupil as it will become flat and lose its life like appearance. Always make sure you leave a small lighter area within the eye to emphasize reflection as this will make the eye look more convincing.

Once I am happy with the initial look of the eyes I then move on to the nose. The nose is more like that of a cat rather than a human so I will shape and shade it accordingly. Being flatter and less prominent than a humans it will be wider at the bridge tapering slightly down to the the nostrils which are more elongated in appearance. See Na'Vi nose. 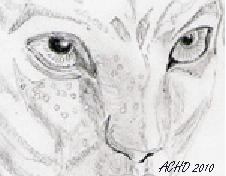 As seen above the shape of the nose expands; over the top of the eyes which is a strong characteristic of a feline species.

Although the mouth is slightly feline in that it has a cat like appearance when opened it is human in appearance when closed. Draw your mouth the same as you would for a human female but slightly elongate its edges. If you require help drawing your mouth see our tutorial Lips and Mouth. The shape of the mouth will depend on the way you have drawn your Na'Vi . See also Na'Vi Mouths

If you have drawn her with her mouth open you will need to emphasise the feline shape slightly more as seen below. Also as the Na'Vi have the characteristics of cats their teeth also partly resemble those of a cat. See Na'Vi Mouths. 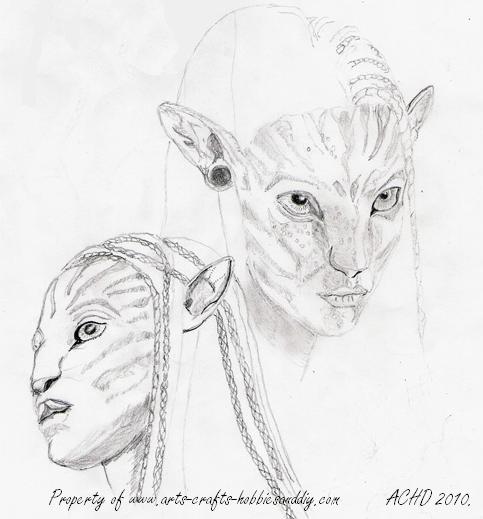