How to draw an iphone.
Draw a mobile phone.

How to draw an iPhone that is tilted.

How to draw an iPhone.

How to draw an iPhone front on.

The first thing you will need to do is to take a ruler and lightly draw a rectangle with a length that is twice its width, as shown. You can also do this freehand if you prefer.

Carefully round off each corner either freehand or by using a coin, button or similar rounded object. Place it against the horizontal and vertical lines in each corner so that it evenly touches both, then draw in the radius of each of the corners.

How to add a menu screen to an iPhone.

To do this draw a rectangle that is approximately 1⁄9 of the length of your phone in from each end. For example, if your rectangle is 90mm long from top to bottom then you will draw your line 10mm in from the top and 10mm in from the bottom edge of the phone. Then using your eye, carefully judge the sides of your menu window. If you were drawing an iPhone that was 45mm wide then your lines would need to be approx1⁄20 of the width or 2.25mm in from each side.

How to add a front facing camera, ambient sensor and ear speaker to an iPhone 6s.

How to add a home button to an iPhone drawing.

The initial iPhone drawing is now almost complete. All that is now required is to add the Ring silent switch, the sleep wake button and the volume button. The ring silent switch and volume buttons are located on the left-hand side of the iPhone 6s. The sleep-wake button is located on the right of the iPhone. The iPhone 6s also has a headset jack, microphone, lightning connector and speaker at the bottom of the phone body. However, these cannot be seen on a front view of an iPhone 6s.

Adding app icons to your iPhone.

Repeat the process down the side of the app menu window but this time only add lines to form the app icon boxes, as shown. To form the icon menu at the bottom of the screen draw a complete horizontal line at the third mark up from the bottom, then place your icon tabs. Allow an equal distance at the top and bottom which is halfway between the first and third line up, as shown.

Finishing off your iPhone drawing.

How to draw an iPhone from the back.

In this tutorial, you will be learning to draw an iPhone from the back.
Firstly, draw a rectangle either freehand or with a ruler that has a length that is twice it's width, as shown.

Round off each corner of the rectangle either freehand or by using a button or small coin as shown.

Once that is done draw a line straight across the phone body from the edge of the curve on each end, as shown.

Next add the Ring silent switch, the sleep wake button and the volume buttons to the body of the iPhone. The ring silent switch is located on the left-hand side as viewed from the back. It is positioned at approx 1⁄9 of the length of your phone in from the top. For example, if your rectangle is 90mm long from top to bottom then you will place your sleep/wake button approx 10mm in from the top left of the iPhone. Next place the ring silent button opposite followed by the volume buttons. Make sure that the bottom edge of the 3rd button is located at approx 1⁄3 of the way down the right-hand side of the phone body. For example, if the length of your phone body is 90mm, then the 3rd volume button at it's furthest point would be 30mm.

How to add an iSight camera to an iPhone.

How to draw the Apple logo.

How to add an Apple logo to your phone.

The next thing to do is to divide the width of the iPhone body in half. To do this, measure the width of the iPhone and divide it by two. For example, if the measurement is 45mm then your center line would be at 22.5mm. With the center located lightly draw a line the length of the phone back. The furthest point of the Apple image is located at approx 1 ⁄ 3 of the way down the body. For example, If the phones body length is twice it's width it will be 90mm in total, therefore, the furthest point of the logo would be approx 30mm down.

The Apple logo is approx 1 ⁄ 5 of the body width in diameter so based on a 45mm body width it would be 9mm and as it is almost a circle draw a box 9mm x 9mm with its centre on the line that you have just drawn. Then draw a circle whose base is level with the base of the square and whose circumference touch's the top corners of the square, as shown above.

With that done, you can now add the iPhone label. The label is located approx 7 ⁄ 9 down the phone body so if for example your phone body measures 90mm in length then the iPhone writing would be located at 70mm from the top. Once you have included the iPhone label you have finished your basic drawing of the back of an iPhone. 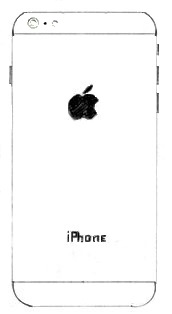 How to draw an iPhone that is tilted.

In this quick and easy to follow tutorial you will be learning how to draw an iPhone that is tilted.

Setting out the iPhone body.

Firstly, you will need to draw two lines that are slightly at an angle. One long vertical line and one line that is half the length of the vertical line, as shown.

Next, draw two more lines of equal length replicating the angle of the first two to form an offset rectangle. Measure the distance of each to set them out correctly, if needed.

Adding a screen to an iPhone.

With the iPhone body now taking shape, add the menu screen. First, measure the distance between the top edge and inside bottom edge as shown and then divide the distance by nine. For example, if the measurement is 90mm then each section would be 10mm. Once you have your measurement, mark it in from each end and then lightly draw a line as shown.

Next, add the sides of the menu screen whose widths are approx 1 ⁄ 20 of the width of the phone so if your drawing is 45mm wide from the inside to the outside edge of the phone front as shown, your measurement would be 2.25mm in from each edge.

How to add the Facetime camera, Speaker, Home button, Headphone jack, Lightning port and Speaker to a mobile phone.

Firstly using a faint line, divide the front of the mobile phone in half lengthways. Then dived the top and bottom section in half widthways as shown. Carefully draw in Facetime camera, Speaker and Home button. You can do this by eye or by using the guidelines as shown. Then draw in the home button.

Next project the vertical line of the home button guide down, mimicking the angle of the base of the iPhone as shown, and carefully add the Lightning port. Using the Lightning port as a guide ad the Headphone jack and speaker holes, as shown.

Your drawing is now complete. You can add some apps or picture by following the instructions in the first tutorial.

How to draw an Xbox One