1936. At this time a series of travelling exhibitions of Picasso's work are being held in Spain, visiting Barcelona, Madrid, and Bilbao. Paul Eluard introduces; Picasso to Dora Maar a French female painter and photographer who has connections to the surrealist movement. They meet at the Café Les Deux Magots in Saint-Germain-des-Prés, Paris. Picasso noted her beauty but, was intrigued by how sad she looked so was instantly attracted to her. Dora was playing the knife game at a table and Picasso spotted her bloodied gloves which apparently he kept, and later displayed at his apartment. She would soon become his lover and companion for the next nine years.

Marie-Thérèse and his daughter Maya travel to Juan-les-Pins accompanied by Picasso and stay at the villa Sainte-Geneviève. Around this time also Ambroise Vollard, Picasso's publisher and renowned dealer of French contemporary art propose to him that he works on a new book. It is a Natural History book by Georges-Louis Leclerc, Comte de Buffon who was a natural history scientist. The book was titled Histoire Naturelle and was originally published between 1749 and 1788. Picasso is asked to do the illustrating and works alongside his printer Roger Lacourière on thirty-one illustrations for the book. Lacourière teaches Picasso a new way to vary the tonal greys in his prints by adding aquatint to the sugar which when added to the copper plate etching; creates varying tones. This year also marked the beginning of the Spanish civil war between the Nationalists and the Republicans. Picasso sides with the Republicans and is appointed an honorary directorship of the Museo del Prado. He vacations in Mougins and Saint-Tropez where he meets with Roland, Valentine Penrose and the Eluards. It is also at this time he begins his affair with Dora Maar.

In 1937 the Spanish ruler's commission Picasso to create a large mural for the Spanish display at the Spanish Republican pavilion at the international exhibition in Paris. Although not what he had originally had in mind he begins work on Guernica, a piece depicting the bombing of Guernica by twenty-eight German bombers. It depicts the carnage and devastation that destroyed the town and killed and injured between 260 and 1,600 people.

The work shows the tragedies of war and the suffering war inflicts upon individuals, and in particular, innocent civilians. This monumental work has eclipsed the bounds of a single time and place, becoming a perpetual reminder of the tragedies of war, an anti-war symbol, and an embodiment of peace. On completion Guernica was displayed around the world in a brief tour, becoming famous and widely acclaimed. Within fifteen days of the attack, Pablo Picasso began painting this mural. This tour brought the Spanish civil war to the world's attention. Dora Maar photographed and catalogued the work in its many stages of completion which helped contribute to her recognition. Wikipedia. Picasso also publishes his Sueno y Mentira de Franco ( The dream and lie of Franco.) which was a direct attack on General Fransico Franco the leader of the Nazi-backed nationalist forces. It contained eighteen etched images that were printed onto, two large sheets of paper. He had been working on them since 1936 and had intended for the images to be cut into postcards that could be sold at the Spanish Republican pavilion at the international exhibition in Paris. He also paints the weeping woman, series, portraying Dora whom he called his private muse and claimed was always weeping. It was painted as a follow up to his piece Guernica and is said to be a representation of human suffering and pain. He also travels to Switzerland to visit Paul Klee a Swiss painter who suffered from Scleroderma and had been in bad health.

In 1938 Picasso travels to Mougins where he spends the summer at the Hôtel Vaste Horizon, with Dora Maar In this year also he acquires a new studio at Rue des Grande-Augustins where he produces a series of double-faced female heads. He also paints several portraits of his daughter Maya including Maya with her doll and Maya with boat.

1939 marks the end of the Spanish civil war and the begging of France's involvement in WWII. For Picasso, it is another year of tragedy; with the death in Barcelona of his mother María Picasso López in January; and the death of his publisher and friend Ambroise Vollard who is killed in a tragic car accident while on his way to Paris in July. He also exhibits his recent work at the Galerie Rosenberg. He spends part of the summer in Antibes with Dora while Marie-Thérèse is in Royan with their daughter Maya. In July he returns to Paris to attend the funeral of Ambroise Vollard. He also decides not to return to Spain and moves to Royan with Dora and his secretary Sabartés. There is also an exhibition of his work being held in New York displaying forty years of Picasso's art. 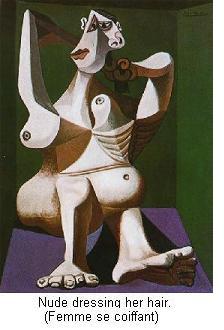 In 1940 Picasso and Dora arrive in Royan following several trips to Paris. He finishes painting Femme Se Coiffant which of the numerous portraits of Dora is one of his most extraordinary nude portrayals of her. Also just weeks before the German invasion of France, fearing that if his home country would not make an alliance with Germany and that if the French did he would be sent to a concentration camp, Picasso applies for French citizenship but his application is denied on the grounds of a damning report from the French secret police.

In 1941 he leaves Royan and writes his first play. It is titled Desire caught by the tail, a dark surrealist comedy that has been described as, " A febrile picture of the life surrounding him in the German occupation during World War II". In this year also Picasso paints the world famous Dora Maar Au Chat which in 2006 became the top-selling work at auction. It depicts his mistress Dora Maar seated in a chair with a small cat perched behind her shoulder. The canvas measures (50 ½ by 37 ½ inches / 128.3cm by 95.3cm) and is one of many that Picasso painted of his mistress throughout their relationship. 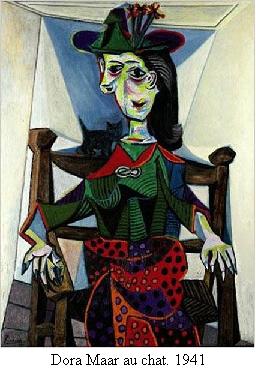 Dora Maar Au Chat presents the artist's most mysterious and challenging mistress regally posed three-quarter length in a large wooden chair with a small black cat perched behind her in both an amusing and menacing attitude. The faceted planes of her body and the richly layered surface of brushstrokes impart a monumental and sculptural quality to this portrait. The painting is also remarkable for its brilliance of colour and the complex and dense patterning of the model's dress. The powerful figure is set in a dramatic, yet simple setting composed of a vertiginously inclined plane of wooden floorboards and shallow interior space that is arranged in a manner reminiscent of Picasso’s earliest manipulations of space in a cubist manner. Wikipedia.

In 1942 Buffon's Histoire Naturelle is published by Fabian and Picasso produces four engravings to illustrate Non-Vouloir by Georges Hugnet. Only twenty-one of the thirty-one prints for Histoire Naturelle was published. Picasso paints serenade a work that refers to Matisse's earlier work music. It is not known if it was painted in competition with Matisse's earlier work or as a compliment to the piece but in both pictures, a woman in blue positioned to the right is playing the guitar while to the left, an ochre figure lounges. Music shows Matisse's impeccable use of colour and composition while serenade is in stark contrast with cubist forms with a dark, foreboding interior. 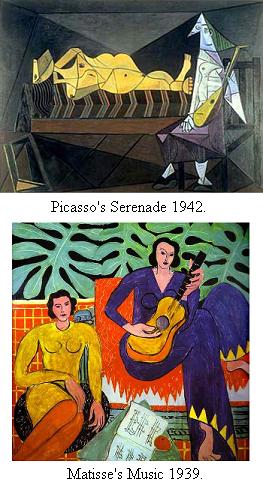 In 1943 he presents Dora Maar with a copy of Histoire Naturelle and produces six more engravings for Georges Hugnet to illustrate èvrefeuille. He meets Françoise Gilot; a twenty-one-year-old painter who would bear Picasso two children Claude and Paloma. Paloma was named for the Dove of Peace posters throughout Vallauris; He also goes to the funeral of Chaim Soutine a Jewish expressionist painter who was in hiding in France and died after undergoing emergency surgery for a stomach ulcer and heavy bleeding.

In 1944 Picasso makes the front page of the French communist magazine the L'Humanité who announces that he has joined the French communist party. It is in this year also that he meets a young seventeen-year-old student named Geneviève Laporte who interviews him for her school paper. His friend Max Jacobs who was captured by the Gestapo and put into Orléans prison dies from; bronchial pneumonia in Drancy deportation camp where he was being held. Picasso performs in his own play along with Dora Maar and Sabartés at the Parisian home of the writer Michel Leiris and Louise Leiris who was a leading Parisian art dealer. Inspired by the liberation of Paris he paints Bacchanal and displays eighty pieces made up of sculptures and paintings at the Salon d'Automne where they were met with anti-Picasso demonstrations. Picasso also illustrates Contrée by Robert Desnos.

In 1945 Picasso paints another politically charged piece using oils and charcoal titled " The Charnel House" making reference to the death camps that were now becoming known of throughout Europe and depicting a slaughtered family. Picasso also begins to explore the creative possibilities of lithography with Fernand Mourlot who was the director of Mourlot Studios and founder of Editions Mourlot. One of his earliest lithographs was titled " Head of a young boy" and was said to be an interpretation of himself as a young boy. In this year also Picasso produces a suite of eleven lithographs of a bull titled " Taureau" these later became a master class in how to develop an artwork from the academic to the abstract.

In 1946 Picasso who was struggling to find a studio is introduced to Jules-César Romauld Dor de la Souchère a schoolmaster and curator of the former Grimaldi château on the ramparts of Antibesworks. He offers Picasso the use of the upstairs for a studio which Picasso gratefully accepts. Francois Gilot claims that Picasso stated that " While I'm here I'm not just going to paint some pictures. I am going to decorate your museum for you," which he did. The centrepiece was titled " Joie de vivre " Antipolis " and featured Francois Gilot dancing in the centre, surrounded by frolicking satyrs and fauns. The Grimaldi Palace was later to become the Picasso museum of Antibes.

Moving to Vallauris in Provence.

In 1947 Françoise gives birth to their son Claude and they go to live in Vallauris in Provence where Picasso meets Georges and Suzanne Raime who are the owners of the Madoura pottery. He asks if he can make a few pieces and is willingly offered a place at the bench were he creates three pieces of pottery. Around this time Picasso was producing a series of lithographic studies of Francois Gilot. Their relationship at this time was one of love and centred mainly around the family environment. This can be clearly seen and felt in his portrait studies of Francois. 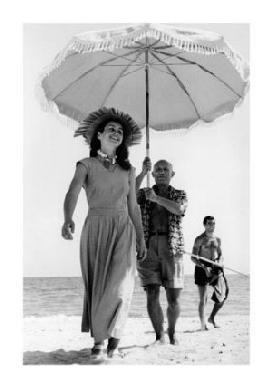 In 1948 Picasso gives a speech at the Wroclaw Congress of intellectuals for peace favouring the release of Pablo Neruda a Chilean writer and politician. He is awarded the medal De Reconnaissance Francaise by the French government.

In 1949 Françoise gives birth to Paloma and Picasso arranges the entrance of Pablo Neruda into Paris. It is in this year also that Picasso's dove is adopted by the Paris World Peace Conference as the official symbol of the various peace movements and Picasso being one of 250 sculptors; exhibits in the 3rd Sculpture International which was held at the Philadelphia Museum of Art.

1950 Marks the beginning of the Korean War. Picasso Creates a lithograph of a dove which is later used for the second world peace conference that is held in Sheffield England that is attended by Picasso himself. He is also later awarded the Lenin peace prize.